A Response to the IPCC Fifth Assessment

You can read the abstract on ELR (and the entire article if you’re an ELR subscriber). Or, on SSRN, you can read the article and find other articles by the authors. According to the ELR website, ELR is “the most-often cited analysis of environmental, sustainability, natural resources, energy, toxic tort, and land use law and policy.”

On Thursday, June 19, 2014, the New York State Assembly and Senate passed the Community Risk and Resiliency Act (A.6558-B-/S.6617-B). The Act amends the Environmental Conservation Law, Agriculture and Markets Law, and Public Health Law. Among other things, the Act:

The legislation implements some of the recommendations made by Governor Cuomo’s NYS 2100 Commission, established following Superstorm Sandy.

The legislation was approved in both houses by wide margins, and had support from a diverse group of stakeholders including: The Nature Conservancy in New York, The New York League of Conservation Voters, The Business Council of New York State, the General Contractors Association, The Reinsurance Association of America, The American Institute of Architects New York State, The Municipal Arts Society of New York, Audubon New York, Natural Resources Defense Council, Environmental Advocates of New York, and The Adirondack Council.

The New York League of Conservation Voters describes the legislation as “one of the environmental community’s top priorities for this session,” saying passage of the Act is “an important step in preparing the Empire State for a changing climate.”

The Nature Conservancy hails passage of the Act as marking “a transition in New York State from focusing predominantly on reactive disaster relief policies to work to proactively reduce risk and increase community resilience.” 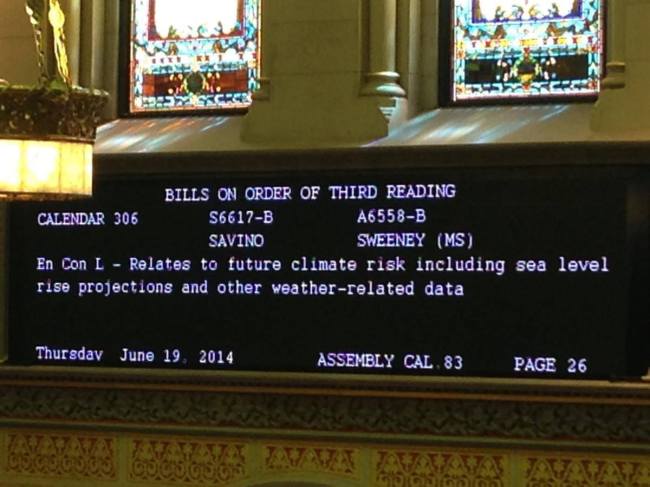 Click here to read the full text of the Community Risk and Resiliency Act. Click here for the bill history and sponsors.